Shrimp Spaghetti with Arugula and Basil 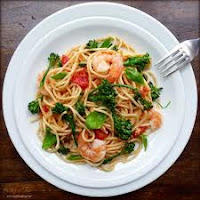 Shrimp Spaghetti with Arugula and Basil

Shrimp Pasta Recipe Ingredients:
Shrimp Pasta Recipe Instructions:
Cook pasta in a large pot of boiling lightly salted water until al dente.
Meanwhile, heat olive oil in a large non-stick frying pan, stir in garlic for 2 minutes, add shrimps, salt and cook them for 3 to 5 minutes or until they turn red. Remove with a slotted spoon and and set aside. Leave the garlic in the frying pan.
Add in the same frying pan the cherry tomatoes and cook them, stirring frequently until they get soft and a little bit sauce is formed (but the tomatoes should not melt completely). Add the shrimp, stirring for 1 minute.
Reduce heat, add arugula and basil, stir quickly. Remove from heat.
Drain pasta and mix with the sauce.
Season with salt and pepper. Serve immediately...enjoy the shrimp pasta recipe !
shrimp-pasta-recipe-linguine-alfredo